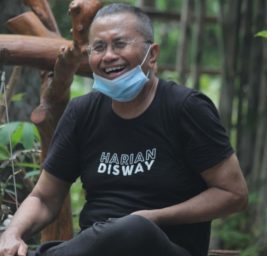 Journalist Fellowship Extended to More Journalists as Pandemic Bites Deeper in Indonesia
Nov 16, 2020
Enlisting KOLs To Your Cause
Dec 11, 2020

Amidst the ongoing digital disruption and the pandemic, the media has been in a continuous decline. The media, especially the print media, is experiencing tremendous pressures. But Dahlan Iskan (DI) has a different belief. The founder of the Jawa Pos Group believes that print is getting more important today than it ever was.

Dahlan Iskan launched disway.id on February 9th, 2019 to coincide with National Press Day. Later he founded Harian Disway on July 4th, 2020. It was not a switch, because both media co-existed. Chief Editor of Daily Disway, Tomy C. Gutomo, said he was only asked to join the media in the last weeks of June 2020, just one week before the first edition was published.

“What I know is that there are many people who have been encouraging Pak Dahlan to start a new media after he had left Jawa Pos. Pak Dahlan also had such a wish but then his son Azrul Ananda didn’t allow that to happen,” said Tomy.

Instead  Azrul made him a podcast, to steer Dahlan away from any attempt to publish a new newspaper. But DI persisted, arguing that it would be his contribution to quality journalism. Once Azrul conceded and gave him the green light, it took Dahlan less than a month to publish Harian Disway. It was lightning fast.

When Tomy joined as chief editor on June 30th, 2020, Harian Disway turned out to have no journalist yet. The layout man had zero experience in media. The printing press machine had just been ordered. Tomy only got his hands on the newspaper design three days before its publication because it had only been completed. The designer was also a fresh graduate. DI deliberately recruited a young designer who had never read newspapers before so that the said designer could come up with a fresh design. A design that broke away from the conventional newspapers format. This approach was reflected in the tagline  of Harian Disway, “Not a Newspaper.”

From DI’s perspective, print media was at the top of the media chain. For him, the online media had already long strayed from the true journalistic principles. Moreover, DI explained, print media was his expertise. He understood the A to Z of print media. And that is why he persisted in creating a new print media.

Although 100 percent of the investment to establish Harian Disway came from DI’s own pocket, 98 percent of the shares was in the hands of its employees. He only kept two percent. This share arrangement copied the Huawei model.

Harian Disway was founded right in the middle of the pandemic. Therefore , the company was designed to cope with this condition. Circulation, for example, was capped at just 10 thousand copies. If circulation exceeded that, production cost, including for paper ink, manpower and distribution, would become too expensive.

Harian Disway employed just 45 people, making the operational costs still low compared to the costs of other more established and larger print media. Whenever asked whether Harian Disway was already in the blue, of course, the answer would be no.  While the operational cost was relatively low, the initial investment was still sizable, including to purchase the printing machines.

The ethnic Chinese community in Surabaya has been idolising DI. They respected the man and DI enjoyed good relations with a lot of businessmen. This support base became one of the main bases for the growth of Harian Disway. Five months into its operations, advertisement continued to flow in. Its subscription also continued to grow. Even before the first edition came into press, the newspapers had already managed to get some 2,000 subscribers.

“It’s just because of this pandemic that Pak Dahlan has not been able to come out with all his tricks,” said Tomy.

The number of readers of disway.id was even much higher than those of Harian Disway. On average, disway.id could see 20,000-25,000 readers in a single day. It once even reached more than 100,000 when DI wrote a piece on the state utility firm PT PLN. Readership, it appears, depended greatly on the topics of DI’s writings. Meanwhile, Harian Disway had only 5,000 subscribers.

“We already have the e-paper version, but it has yet to be released to the public. We are waiting for the right momentum,” revealed Tomy.

Editors at the Harian Disway are also writing news articles. Reporters are the ones tasked with getting the necessary information as requested by the editors. Half of the newspapers’s reporters are interns, therefore they are simply tasked with gathering the information needed for the editors to write their articles. Or just help the more senior reporters to gather their writing materials.

Harian Disway has three segments, each catering to specific readers. They consist of the core segments, the sport segments, and the lifestyle segments. The core segment contains the main cover story, economic news (China, Taiwan and Hong Kong in particular), and legal affairs. Their signature is serial news published daily. For example it carried a story about Chin Chin, a property entrepreneur who was imprisoned after her husband accused her of embezzlement. She was finally freed. The story was carried in a series of 45 daily articles. DI himself wrote the story.

There was also a serial about the Bethany church. It recounted a quarrel between two pastors which lasted until they both died. The series was written into 40 episodes. “Imagine, the Bethany congregation has 20 thousand worshippers and they pre-ordered Harian Disway just to follow the story. This is amongst one of DI’s skills in looking at the market,” explained Tomy.

Harian Disway was currently writing about Ryan, the gay butcher from Jombang who murdered 11 people. They plan to break down the story into 40 episodes . “We asked her mother to visit Ryan in Gunung Sindur prison. That’s how we got to interview Ryan who just graduated as Hafiz (a person who has completed reciting the Quran),” said Tomy.

Harian Disway intended to continue to come up with serial reports as its specific signature. For its opinion section, Harian Disway featured a Guest Editor page. This page would carry opinion pieces by senior writers, amongst them is Arif Afandi, Dhimam Abror, Agus Mustofa, Tofan Mahdi, Imron Mawardi, Joko Intarto, and Djono W. Oesman. They were Jawa Post journalists during the 90s.

In the sports section, reports on the Persebaya soccer team constitute its mainstay. Its reports on Persebaya are always exclusive. It could afford exclusivity because the president of the club is none other than Azrul Ananda, therefore it had direct access to the team. Its lifestyle section covered not only western artists but also those from Asian countries, including from China, Taiwan, Hong Kong — all mandarin speaking countries. There were also sections about Korean drama, culture and literature.

Starting on November 19th, Harian Disway’s frontpage carries a full-page caricature. The daily is trying to institute this as another characteristic of the newspaper. The subjects are public figures who were trending in daily conversation. (*)